In this post you will learn all about the history of the Jack Russell Terrier dog breed as well as their physical characteristics and personality traits. The Jack Russell Terrier is not a breed you will typically find on a top 10 list. Probably not even a top 20 list. They are a very special breed but they are a handful. I personally love them. I am a bit biased as I just brought home my 5th Jack Russell.

What is a Jack Russell Terrier? 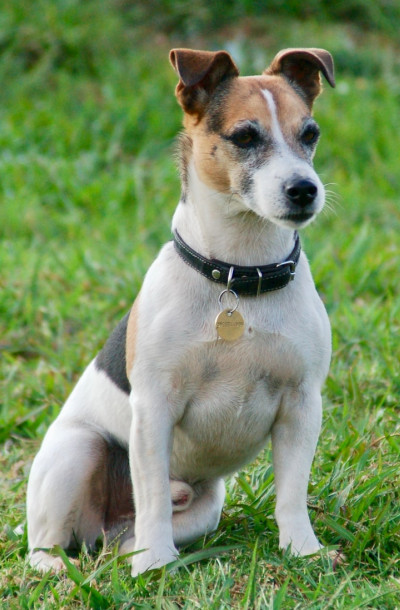 Jack Russell Terriers are a small dog with a big personality. Jack Russells are energetic, independent, and curious. They are loyal and affectionate. This small dog thinks it’s a lot bigger than it is and is very courageous.

History of the Jack Russell Terrier

The Jack Russell Terrier was developed in Southern England during the early to mid-1800s. In the mid 1800s, Reverend Parson John Russell (aka “Jack” to his friends) developed a strain with his dog, Trump. Russell bought her from a milkman in 1819. Trump was the foundation of the breeding program.

Russell created the new breed to be a working dog that hunts and gets foxes out of their dens. He bred with the goal of specific characteristics, both physical and mental, with the goal of fulfilling the foxhunting role. The breed was also able to work with raccoons and woodchucks.

In the 1850s, people recognized the dogs as their own type of Fox Terrier as well as a breed. After so much success with the strain, the breed would eventually take Russell’s name.

When Russell passed in 1883, there was little effort to keep the strain alive.  There were a few though and they did put effort into keeping Russell’s lineage alive with multiple dogs. These dogs were direct descendants of Russell’s dogs.

In 1894, Arthur Blake Heinemann founded the Devon and Somerset Badger Club. He formed the club to promote badger digging. Heinemann used terriers from Nicholas Snow that were likely to have been direct descendants of Russell’s dogs. Heinemann created the first breed standard for the breed. The fox hunting terriers that they had though, were not well suited for badger digging.

They attempted to breed with other breeds with the goal to add strength to the descendants of Russell’s dogs for the purpose of badger digging. They created different mixes with different results. One of the types that was possibly a result of this, was the short legged Jack Russell terrier. Another change was happening between the breeding for a show dog and breeding for a working dog. During this time, around the beginning of the 20th century, the breed of terrier was commonly associated with Russell.  With very little success of developing a badger digging dog, they changed the name of the club to the Parson Jack Russell Terrier Club.

There were those who still wanted the working dog and even tried to have classes for working terriers. The classes did not have enough dogs to justify continuing the classes though.  The Parson Jack Russell Terrier club closed in the late 1930s.

After World War II there was a decrease in Jack Russell terriers. Hunting declined and the amount of hunting dogs also declined. People began having Jack Russells as a family dog.

There were many breed clubs created in the 1970s with the majority being in the UK. The common goal was to promote the breed.  One of the clubs, the Jack Russell Terrier Club of Great Britain (JRTCGB), set a standard that included a range of sizes of the breed.  The South East Jack Russell Terrier Club (SEJRTC) set a stricter standard.  While the JRTCGB focused on the breed’s working abilities, the SEJRTC was more focused on the physical characteristics.

Ailsa Crawford, one of the first Jack Russell breeders, established The Jack Russell Terrier Club of America (JRTCA) in 1976.  The JRTCA is a unique club in that they only register dogs when they are full grown and meet the breed’s criteria. This ensures the qualities of the Jack Russell remain in place. The JRTCA was against the American Kennel Club (AKC) recognizing the breed. They wanted the breed to keep the working dog characteristics.

Jack Russell Terriers of today are similar to the fox terrier from the early 1900s. Breeders continue breeding the dogs as a working dog and they keep the characteristics for this purpose.

Russell saw characteristics in Trump that made her the foundation of his breeding program. Trump was what Russell was seeking in a fox terrier. (Any terrier that went into fox holes was a fox terrier at that time.) Trump was the correct color with the correct markings. She was white with brown patches on her head and at her tail. Russell bred Trump with the goal of developing a terrier that had enough stamina for a hunt and was bold and courageous enough to go into fox holes. They also had to be the right size and to fit in the fox hole. Additionally, they had to have the courage to get a fox out of the hole but refrain from attacking the fox. The terrier type Russell bred became a popular choice for other hunt enthusiasts.

After Russell’s death in 1883, a few people continued to breed from the strain Russell created. The aim at one point changed from foxhunting to badger digging. While attempting to optimize the breed for badger digging, it is likely that they produced some terriers having shorter legs. From this they created another new type of shorter legged terriers, which also carrying the name of Russell.

To this day, people consider the Jack Russell Terrier a working terrier and people breed them to be a working terrier. People don’t take Jack Russells into the field hunting fox like they used to. However, there are still some people training them to use these skills. The JRTCA has trials throughout the country throughout the year. These events typically have a confirmation class, racing, go-to-ground, agility, obedience, trailing and locating, and additional non-sanctioned classes.

The Jack Russell Terrier is a small dog.  JRTs are typically 10-15 in tall at the base of the neck (withers) and a proportionate length.  Ideally, they should weigh between 14-18 lbs.  JRTs are predominantly (greater than 50%) white with black, brown, or tan markings.  This could be a single color or a combination of the colors for markings.

There are three types of coats which are smooth, rough (wire), or broken-coated (combination of smooth & rough).  All of the coats are dense double coats. The hair itself is course.  It is not silky or soft even on a smooth coat.

Their ears should fold over and look like a V. The breeder will normally dock the tail.

While Jack Russells are small, they have big personalities.  They are curious and fearless and will explore if given the chance. Additionally, the Jack Russell is a very intelligent, energetic, athletic dog that wants a job and mental stimulation. JRTs are going to be bored if you don’t give them something to do. They will chew, dig, and whatever activity they can do if they are bored.  JRTs are can also be vocal.

As with all dogs, a Jack Russell puppy needs socialization early. Exposing them to different people, different dogs, different situations, and everything else that is possible will help as they grow up. If not socialized properly, JRTs can sometimes become aggressive towards other animals and other people. They need socializing as early and as often as possible.

Because of their breeding, JRTs are not rodent friendly.  Many are not cat friendly unless exposed at a young age.

Jack Russells are able to do many fun activities due to their endless energy and athleticism. You’ll need to start with basic obedience, but after that, there are options. Agility is a good option, as is flyball.

All of the above being true, a Jack Russell is an incredibly loyal and loving dog. While they need a job, they also want to please their owners. They want to be near their people most of the time.

While I remain bias, the Jack Russell is an incredible dog. They are not for everybody though. Breeders breed Jack Russell Terriers to be working dogs and with that comes the job of keeping this little dog entertained and getting them the exercise they need. They will keep you on your toes while also keeping you entertained.

Are you a Jack Russell lover? What activities do you do to keep your JRT busy?